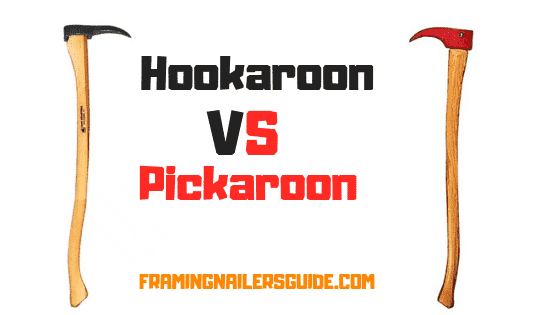 Trimming down the tree and splitting them into pieces are quite hectic jobs.

But you know what is equally (or even more) hectic?

Well, for some newbie carpenters, it’s the job of keeping the cut-down logs organized.

When the entire tree is cut down into smaller pieces of firewood, the role of hookaroon and pickaroon comes up.

These are pretty look-alikes of an ax. But the purposes of these two types of tools are quite different.

The purpose of crafting this article is to explain the differences between hookaroon vs pickaroon, and establish a verdict that makes sense. Let’s start-

Here we have described the critical differences between Hookaroon and Pickaroon for you. 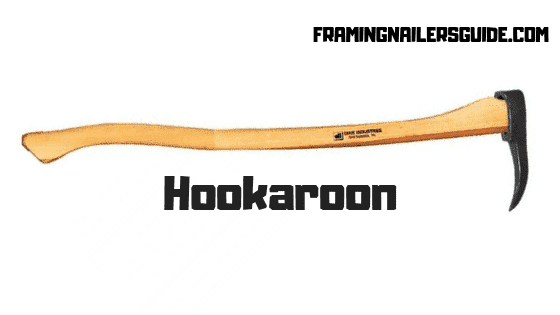 The hookaroon is an ax-shaped cutting tool that consists of a long handle and a metal cutting edge. The handle itself is longer than usual axes, and the metal part sports a spiky and bent peak.

Usually, a hookaroon is used to deal with a bit heavier and thinner kinds of logs and tree branches. We’d explain it in more depth below-

What makes a hookaroon stand out from its elder sibling pickaroon is, it’s a spike on the top of the cutting edge. Usually, pickaroons feature a straight-type bending, whereas a hookaroon comes with an inward bend on the tip.

Therefore, the bend can create a sort of miniature hook at the top of the hookaroon. And as the bend creates a hook shape, it’s named a hookaroon.

Talking about the uses of hookaroon, there are some that make a perfect match with a pickaroon. And some don’t. First, it is massively used in dragging, lifting, and rearranging logs and lumber.

But if you are dealing with a more substantial kind of log, there might be a chance of slipping off once the tip of a pickaroon is lodged inside them. This very problem is solved with a hookaroon. As it contains a hook-shaped tip, it creates a better bond with the logs.

Our recommended Best Hookaroons on Amazon: 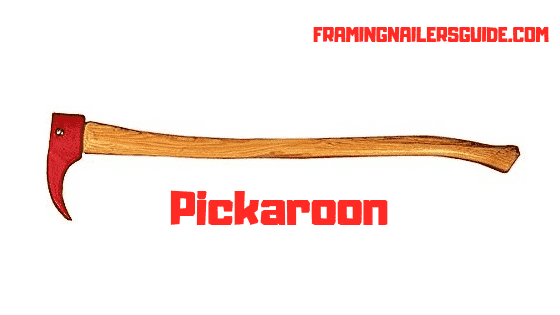 The definition of pickaroon goes like this- it’s a woodworking tool that has a comparatively longer handle than a hookaroon, and also comes with one single spike on the top of the cutting edge.

However, wondering about the uses of this handy cutting tool. Here you go –

The root purpose of using a pickaroon is to make picking and stacking cuts on firewood and other day-to-day logs. And the advantage of this tool is it makes the cutting chore way easier than many convenient tools.

That being said, carpenters and woodworkers use a pickaroon to cut, rearrange, drag or stack piles of unorganized wood.

Using a pickaroon is by dropping it down like an ax or swinging it around in an upward direction. As you might have seen in the image, a pointed part of the tool ends up lodged in the piece of wood. And that’s what makes the work done.

However, to modify the effectiveness and to make it more adaptable to different purposes, the top of the spike might be a little bent sometimes. In some other cases, it can be kept straight as well.

Another essential part of the actions made with a pickaroon is the long handle. As we’ve said before, the handle of a pickaroon is relatively longer than usual axes. And provides some additional leverage to the cutting force. Also, it reduces more strain and fatigue of working.

Our recommended Best Pickaroon on Amazon:

So, Hookaroon or Pickaroon. Before ending up with a straightforward answer to the question, let us state it clearly that these two tools are quite similar to each other. As long as many carpenters’ opinions are concerned, both of them are quite identical tools.

The significant similarities in uses are their ability to stack wood, load them, and place wood on splitters. But when it comes to a micro-level analysis, there comes a head-to-head comparison.

The direction and bending on the tip of the tool make them different. With a Pickaroon, the tip is bent either inward or outward, and the amount of bend is not that much.

On the other hand, a hookaroon has quite an inward bend and makes it look like a hook. As a direct impact, the tip can anchor itself inside the wood by lodging at an angle.

So, what’s the verdict?

Alright, so this is all we had to say about the comparison between Hookaroon vs. Pickaroon.

Hopefully, you have got every point and have been able to mark the differences between both of them.

Also there are a handful of similarities between these tools as well. Hopefully, you’ve kept your eyes on those as well.