What Is An Inverter Generator: How Does It Work? 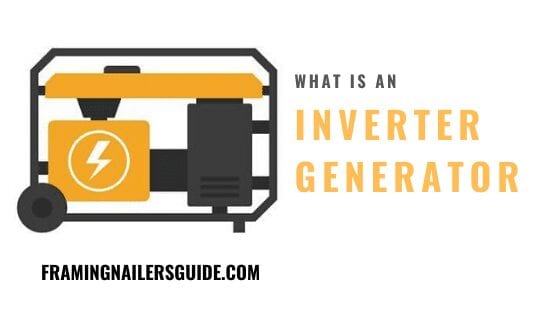 In today’s post, I am going to answer all of your questions so keep reading.

What is an inverter generator?

This type of generator is the same as any generator on the market; however, it is equipped with some extra circuits that make it stand out from others.

Any generator first burns the fuel, and then with the help of produced gases, it drives the rotor, which in turn produces electricity. Now this produced electricity is AC power so you can use it directly in your home.

This type of generator produces AC power after that converts it to DC power and then again inverts it back to AC power. We will discuss the advantage of this process later in this article.

How does the inverter generator work? 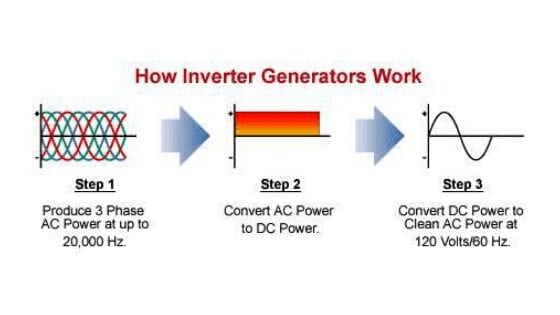 The inverter generator is nothing but a DC generator, and as I mentioned previously, the final power is achieved by passing it through three stages. But first, let’s understand it’s working.

As a result, voltage is induced in the field winding, and when we complete the circuit, the current will flow in it. The problem here is that the rotor is rotating at high speed, and it is difficult to collect the electricity from such a rotating part of a machine.

So the brushes are used, which are kept in continuous contact with the stator. And due to high friction, the carbon wears out quickly so you need to replace them now and then to ensure the proper functioning of your generator.

All DC generators use the commutator to produce the AC power and after that three-stage power generation is used.

What are the advantages of an inverter generator?

Inverter generator has so many advantages. Here I have explained some of them in detail and as simple language as possible so everyone can understand them.

This is probably the most important advantage/feature inverter generator has. For the sake of keeping this article as simple as possible, I will not go into technical details.

Just understand this, all two-pole generators (which is widely used in home applications) need to run at a constant 3600 RPM to generate the 60Hz power supply.

So it doesn’t matter how many watts of load you are running on your generator, it will consume the same amount of fuel.

Now in the case of an inverter generator, it is not necessary to run at a constant 3600 RPM speed because the built-in inverter can convert any DC power to AC power with desired frequency.

So the inverter generator adjusts its engine speed according to the power demand; hence, it is very fuel-efficient, and you will be saving a lot of money on fuel costs. 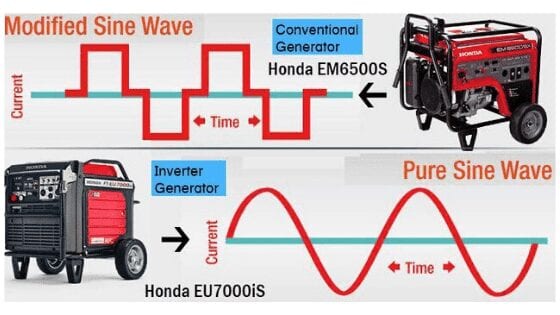 As the load fluctuates, the rotor speed also fluctuates, which creates noise in power output, and this phenomenon is known as Third Harmonics Distortion.

In any generator, you cannot avoid the load fluctuation or the rotor speed fluctuation. But you can eliminate the fluctuation in frequency by using the three-stage power conversion.

And this arrangement is used in the inverter generator, and as a result, you will get pure sine wave power output.

The high THD in power heats your devices, and sometimes it can permanently damage your appliances.

Any generator mainly produces noise due to internal gears and combustion of fuel in the engine. Now, as the load on the generator increases, it will burn more fuel to keep up; hence, the noise production will also increase.

That is not all, remember I said earlier that the conventional generator has to run at a constant 3600 RPM speed. So at this high speed, the generator will produce more compared to lower speeds.

On the other hand, the inverter generator will make less noise because it does not need to run at 3600 RPM.

Moreover, inverter generators are equipped with special mufflers and noise dampening material that will reduce the noise output even further.

What are the disadvantages of an inverter generator?

All the great things have some disadvantages, and the inverter generators are no different.

As you all know, inverter generators are the costliest generators on the market compared to dual-fuel, portable, or solar generators.

If you look at the bride side, then you are getting all these mind-boggling features packed in one generator, so I think I can say it’s worth paying the price.

I hope you got an overview of what is an inverter generator and how does it work. Undoubtedly it is an essential/must-have device during an outage.

The device is fuel-efficient, light-weight, and as well as quiet. It will cost you a bit more but the advantages are huge. If you have anything to ask, comment below.