Difference Between Impact Driver and Hammer Drill in 2023 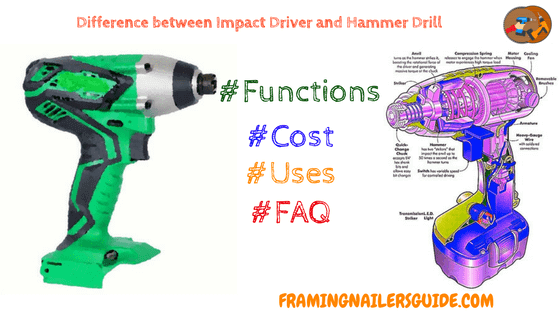 In the world today, those who use power tools are mostly confused about the difference between an impact driver and a hammer drill.

They are not mainly at fault here because the two can use in place of the other in some cases.

However, the most notable differences between the impact driver and hammer drill lie in the cost, weight, appearance, and method of operation.

Purpose can differentiate the two power tools. A hammer drill commonly used to drill into concrete-like hard surfaces, although few hammer drills do possess a feature that turns them into a regular drill or driver.

While an impact driver’s primary use is to drive in fasteners like screws, it can alternatively be used to drill holes.

What Is an Impact Driver? 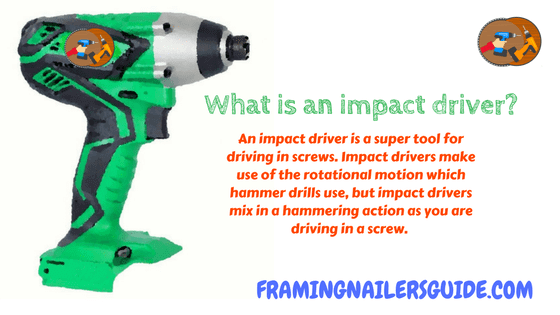 These hammering actions are just not downwards but also sideways, and this makes it an easy task when driving in screws into tough materials.

Another benefit of this movement is that it prevents the screw from slipping off and potentially ruining the screw. Did I also mention the noise this tool gives off while in use? Well, that noise is a result of the hammering action, and it occurs many times depending on how rapidly you are driving in the screw.

For detail and updated information read what is a hammer drill, Impact driver, and hammer drill differences with the comparison charts.

However, to continue driving the screw and overcome this resistance, impact drivers must deliver extra torque. These impacts/bursts of power occur approximately 50 times per second, and it delivers the strong rotational motion force to the screwdriver bit, and it increases the torque (turning force) on the screwdriver bit to overcome a higher resistance.

The hammer drill feels more like a little jackhammer in your hands while in use because of the noise it gives off. If you are using the tool the very first time, you are bound to think that it has broken the first time. The hammer drill looks like a regular drill bit with the hammer setting, and what does this hammer function do?

Try to imagine you are drilling, and you are being assisted by a friend hitting the drilling tool with a hammer at its back, this is precisely what happens when you use a hammer drill, a difference is that the hammer hits are at a fast rate.

Another difference between the impact driver and hammer drill is relating to the price. The impact driver is a lot less expensive than the hammer drill, but that is understandable because the one used for lighter work and the other, a more demanding work.

However, I usually would go for a combo pack which is more budget-friendly. The combo packs are not just limited to being equipped with these power tools but other useful additions also. Most searches of these tools at Amazon bring up these combo packs, but you can check their prices here.

Usage is another factor to consider when talking about the difference between an impact driver and a hammer drill. If you are a DIY guy or interested in being one, it’s best you know that the impact driver can be used to remove and as well drive in screws in general DIY construction works.

While the hammer drill is the more substantial and more significant of the power tools used for drilling through cement, concrete, and other masonry. Some guys say it is also useful for drilling woods, but I don’t think that is correct because it’s not a good fit for woodworkers who mostly tend to use regular drills.

When to use Impact Driver?

Usually, an Impact driver provides much greater torque but in fast bursts, much like a hammer that provides bursts of linear force.

This makes the best choice of tool for heavy work such as driving long screws/bolts (you can even remove the nuts from the wheels of your car with most impact drivers) however; the hammering action makes this tool somewhat difficult to control.

They are also not suitable for driving towards something very smooth: between hammer blows, torque not applied and the drill can turn backward. You will see this by holding the chuck with your hands while the driver is on.

You can feel the beat of the blows, but the plate will not turn. Finally, some impact drivers do not have a clutch, which means you must be very careful if you drive something that could be too tight or break due to high torque.

In addition to the higher torque, the impact drivers have another significant advantage in the sense that it is not necessary to hold them tightly to provide the torque. The momentum of the rotating hammer in the interior is what provides the force of rotation, so even when handling something very hard, it is fairly easy to hold the tool.

When to Use Hammer Drill?

Since we are still pointing out the difference between an impact driver and a hammer drill, we ought to look at what the hammer drill used for and ascertain when to use it.

The hammer drill used for drilling holes. Most hammer drills equipped with a masonry bit, and are designed to drill into mortar, stone, brick, concrete, or any other masonry you can think of.

When this tool operates, it utilizes a rotatory motion like a regular drill and also a hammer type, forward action. Don’t feel confused; a hammer drill is not for driving screws, that is a mistake that most people make, and as a matter of fact, it just used for drilling holes. The impact driver is responsible for driving screws as mentioned above.

Question#1. In general, what is the difference between an impact driver and a hammer drill?

Answer: An impact driver’s work is mainly to drive in screws and nuts using a high turning force while a hammer drill used to drill concrete and other masonry work.

Question#2. Can I use an impact driver to make holes in concrete?

Answer: Yes, but you will have a much slower work rate. It’s best to use the hammer drill for such tasks.

Question#3. Can I use a hammer drill for driving in screws, nuts?

Answer: Yes, you can use a hammer drill to drive-in fasteners.

Question#4. What motion does an impact driver operate with?

Question#5. What motion does the hammer drill operate with?

Answer: Hammer drills operate in a back and forth movement.

Question#6. Between the two tools, which one weighs heavier and is also larger?

Answer: The hammer drill is larger and heavier.

Question#7. Between the two power tools, which one is more compact and lightweight?

Answer: The impact driver is more compact and lightweight.

Do you need both? Watch the video

What is the difference between the impact driver and hammer drill? I think the question should be what do you need it for, and which you would need more often.

Even though the impact driver is used for fastening screws and the hammer drill are used for drilling holes, both power tools do not compete with each other instead they complement each other. So never think it’s the case of one power tool being better than the other.